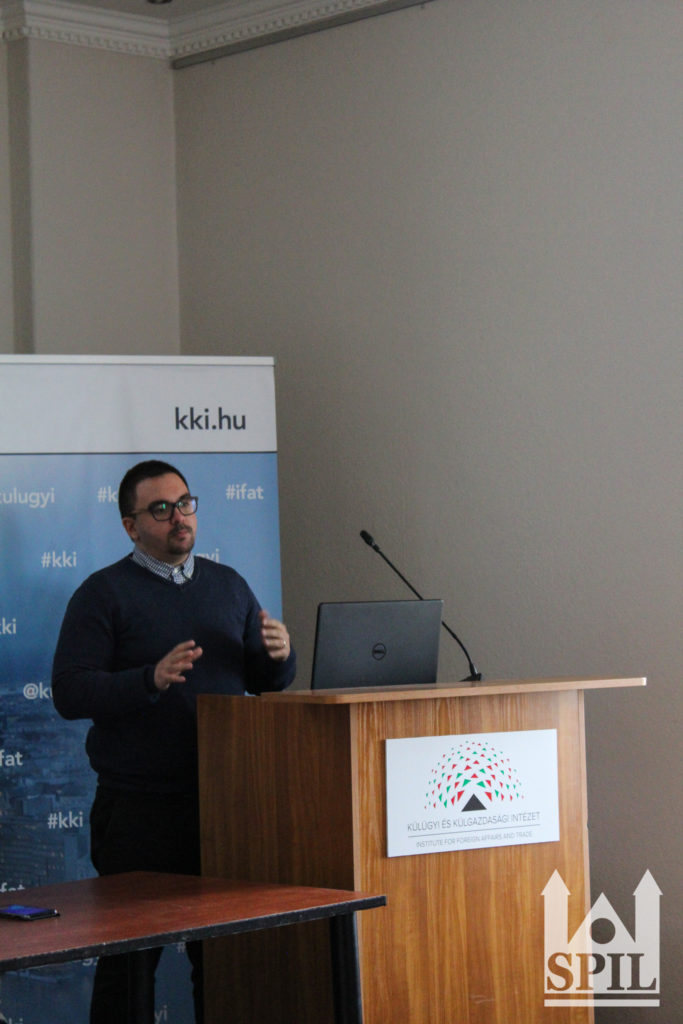 The first full day of the trip started with an early wake-up call at 7 am. At 9am we painfully walked up the Gellért hill to our first meeting at the Tom Lantos Institute where we were welcomed by great focaccia and drinks and met with the directors of the various programmes. We learned about the crucial role minorities play in Hungary, how researchers work to fight anti-Semitism and raise awareness on Roma identity. It was also a great opportunity to get insight on how an institute works and its role in Hungarian society.

After the Tom Lantos institute we went to the Great Market Hall to get lunch. This is where most of us got to try Hungarian food for the first time, it appears to mainly consist of a lot of meat with a lot of fat and a bit more meat, delicious (although there are also some vegetarian options!).

The weather was rather unstable as it rained a bit in the morning. Thankfully it stopped just in time for our walking tour around the city. We were introduced to its history, saw great street art, funny monuments, unusual buildings, the second biggest parliament in Europe and the shortest avenue in the world, it was great.

After a long and cold day, we hurried back to the hostel where everyone got free time to enjoy a well-deserved meal and discover the city. Your author for example went to “humusbar”, a great and cheap hummus restaurant where he particularly recommends the pitas.

To conclude the first day, some SPIL’ers decided to explore one of the highlights of Budapest: the ruin bars. Old half-abandoned houses turned into bars or clubs; they are a great summary of Budapest: an intriguing and secret city that constantly reinvents itself. The night went on till early the next day, giving us just enough sleep for the following day. 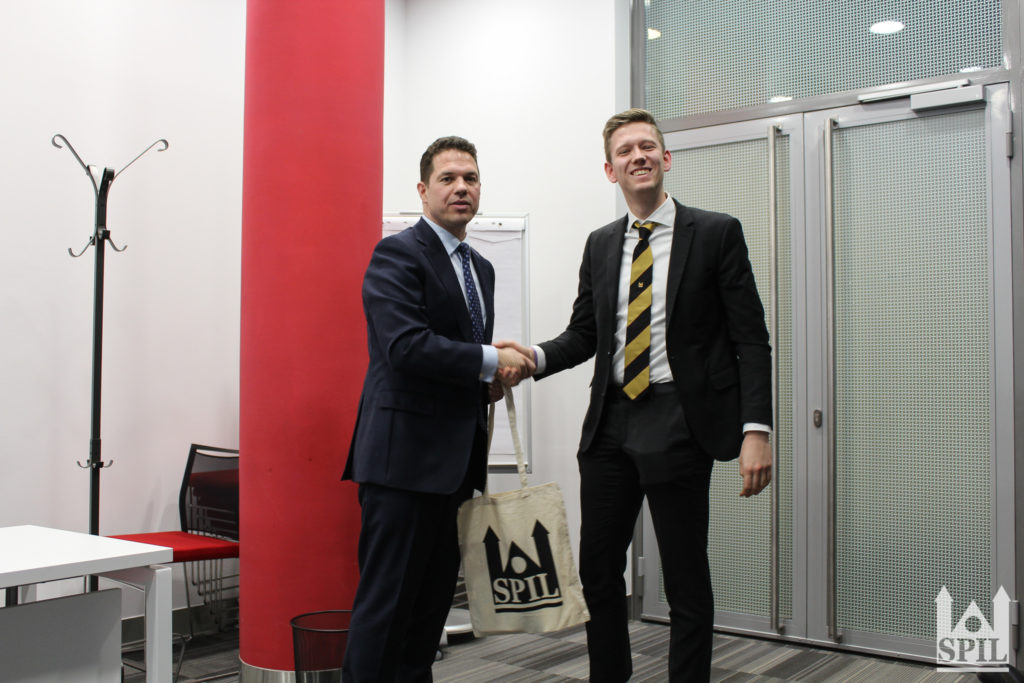 Early Thursday morning we headed towards the Hungarian parliament. After a 20 minute walk in the sun we could see the massive white building, one of the world’s largest parliaments, and gathered in front of the underground entrance to the visitor centre. We went through security and picket up the earpieces for the tour of the building, and met an enthusiastic and knowledgeable guide. She took us up the many steps of the so-called “golden stairs”, and through the beautifully decorated halls and corridors of the parliament. We learned a lot about the architectural features of the building, some fun facts about Hungarian history and even saw the holy crown jewels!

After our visit to the parliament, we went back to the hostel and put our suits on. We then took the metro to the Buda side of the river, and walked to the Dutch embassy for our second meeting of the day. Although the embassy building was quite a contrast to the spectacular parliament, we had a very nice meeting with the Dutch deputy diplomat. He answered all our questions on diplomacy and foreign affairs and spoke about his personal experiences from working in a wide range of countries. It was an informal but informative talk, which inspired a couple of the participants to aim for a career in diplomacy.

In the evening some people chose to go ice skating in the beautiful city park, which was a fun and slightly dangerous way to end the day. Back at the hostel it was once again time for pre-drinks and other social activities, and continued to discover Budapest’s famous nightlife afterwards. 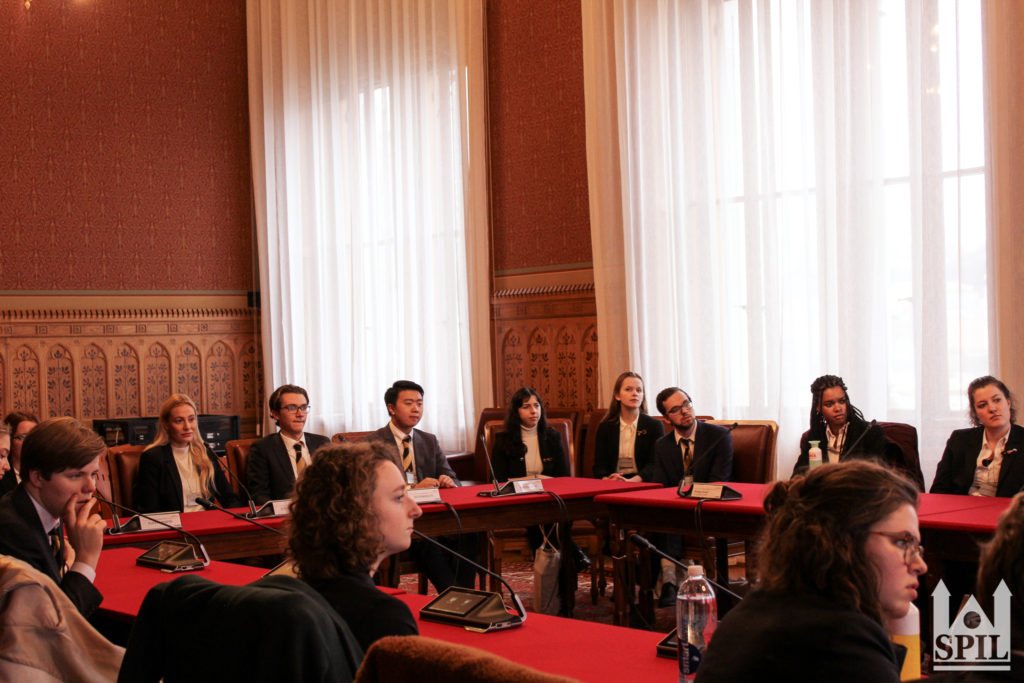 On the third day of our visit, we began with a 30 minutes’ walk up Buda’s citadel’s hill to meet with the Institute of Foreign Affairs and Trade. This branch of the Hungarian Ministry of Foreign Affairs and Trade conducts different research projects in order to advise the ministry. Our host presented us his own career as a scholar all around the world, including some spicy stories of his students back in Mexico. We also had the opportunity to discuss matters of interest to the Ministry regarding dynamics with Europe and Russia. We were able to better understand the position Hungary holds in the world and its need to maintain good relations with many conflicting international interests.

After a short break for lunch, we gathered around Parliament to meet a representative of Jobbik, one of the main parties of the opposition block. Obviously, because everything cannot be perfect, we had the chance to happily stand in line for about an hour for everyone’s passport to be checked. But hey, what is time when you get to use the VIP entrance of such a pretty building? This short but intense meeting, we had the opportunity to hear about the change in the party’s ideology at the beginning of the last decade. Still known for its previous far-right branch, Jobbik is now a pro-democratic conservative party. Mr. Brenner insisted on how this new identity led the party to lose important popular support, but also how it allowed the remaining members to defend what they do think to be right.

From there, we directly went to meet with a representative of MZSP. On the opposite ideological side of the opposition coalition, the Hungarian Socialist Party also wishes to remain faithful to its ideology. After discussing of the hard time that opposition parties have when facing Victor Orban’s government, we could better understand how a socialist and a conservative felt the need to cooperate. MSZP remains proud of the communist inheritance of the country and bases its electoral support in the older generation which is equally emotional about the good things of the time; which apparently doesn’t have enough “sex appeal” for the young generation. The speaker’s energy and honesty managed to keep everyone up and interested and even had a good laugh.

The return to the hostel was saluted after this very informative and demanding day. The weariness (and hangover for some…) did not prevent anyone from enjoying every meeting and learn a lot about the current political reality in the country. Being able to compare two seemingly opposite sides of the opposition coalition allowed to better understand the challenges this parliamentary group will face if elected together in the next years.

In the end, we had a well-deserved and warm dinner before ending the night at the hostel or some new ruin bar, enjoying the free night before sleeping in on Saturday morning. 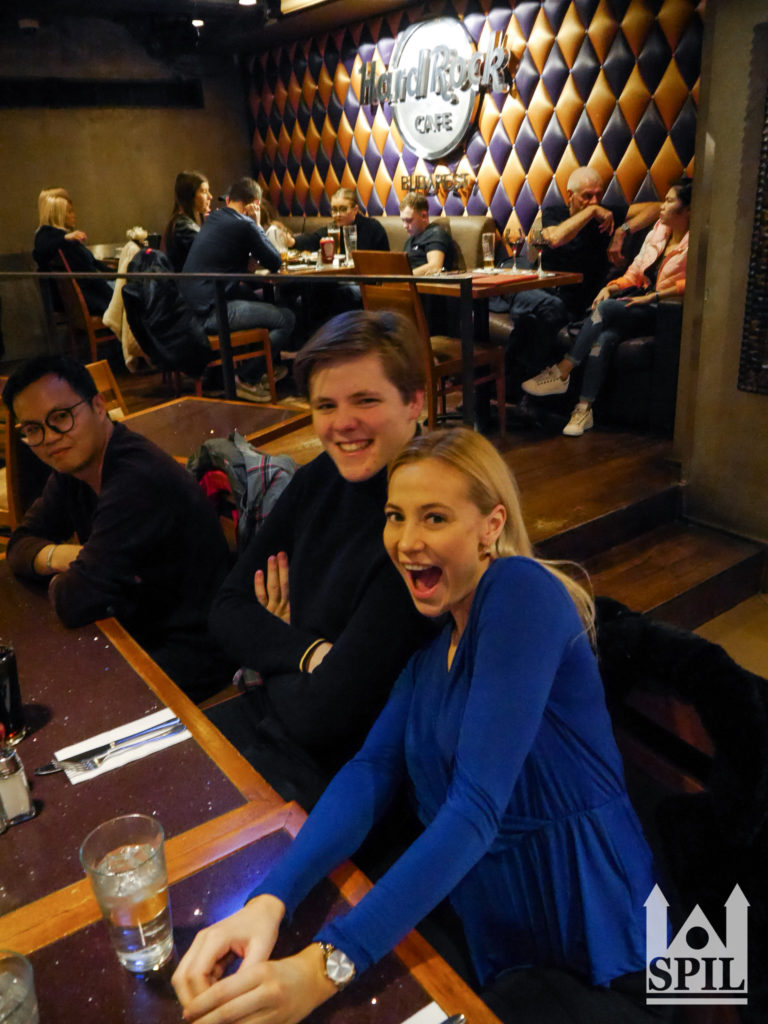 On Saturday we had our free day, so that everyone could sleep in and discover the city on their own. Since it was the first day without a wake-up call most of our group took advantage of that and slept till midday, after a fun night out in the infamous „instant“ club. Well rested but still a little bit hungover we were getting some food from the supermarket or bakery next to our hostel. After having a nice breakfast most of us were heading to the city centre. Now everyone had the chance to visit the sightseeing spots we haven’t visited before.

Since the weather was great a group of people went to the Buda castle and the viewing platform of the famous St. Stephens basilica. But we also had time for some shopping and a visit to the biggest thermal baths in Budapest. Most of our group enjoyed the afternoon in the warm outdoor pools of the beautiful Szecheny bath, where we could relax and recover from our hangover. It was a great place everyone should visit when once in Budapest even though some people found the thermal baths gross for some reason…

After a well spent afternoon the group was gathering at the hostel again to go out for the “closing dinner” at the Hard Rock Cafe all together.  Besides enjoying the delicious Burgers our chair Bas also got a little surprise birthday present ( even though it wasn’t his birthday) which was a big sundae. Afterwards we went back to the hostel where we gathered at the common room and listened to the speech by Bas, Frits and Noor which included a little review of the highlights of our trip. Pre drinks were starting and as the time went by our alcohol level increased till we made it to a karaoke bar.

Everyone had a great time singing to their favourite songs making it a great last night! 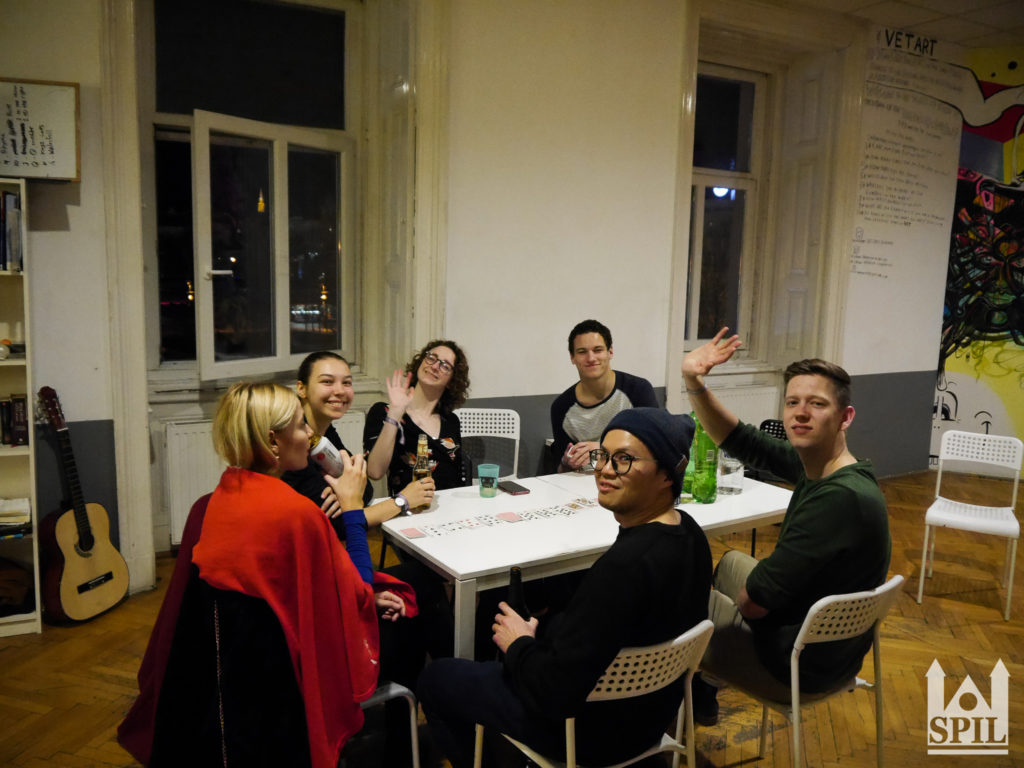 We had come to the last day of our wonderful trip to Budapest. We had to get up quite early, because we would still have our last activity: visiting the House of Terror Museum. Of course, we used our last night to go to a karaoke bar and benefit from the cheap prices for the last time. But, as we are very responsible adults, we had a small drink and went to bed very early. Some people however still had a small hangover and others had to hurry packing their bags, despite the fact that our lovely chair Bas advised us to pack our bags on Saturday, but we left on time for the museum.

We arrived quite early at the House of Terror museum so people had some time to get a cup of coffee to enter the museum fresh and sharp. It was a very impressing museum which showed how life was like for Hungarians during the times of the two terror regimes they survived. It had some beautiful old bunkers which revealed the way prisoners had to live, but the highlight of the tour was the fast elevator which broadcasted a very touching movie about the way of living in these times. Everybody was very impressed about the museum when we came at the end.

We had some free time to get lunch, went to hostel to get our bags and stepped in the bus to the airport. We arrived at the airport quite early, so we conquered half of the departure hall with our bags and bought our last Hungarian beers to get rid of our Forints. The flight arrived a bit late at Schiphol because we had some headwind, and we saw how the employees of Schiphol treated our bags with lots of care. We entered our last bus of the trip towards the baggage hall and after we said goodbye to everyone, Bas dropped our last ‘SPIL OUT’ and the trip was officially over.